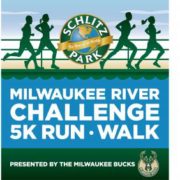 Although she was late getting to the event, that didn’t stop Mary McDonough from chasing down the field to reach the podium in the Milwaukee River Challenge 5K Run & Walk. Mary’s race literally started from her car, running to the start line to join the race already in process. By the time she reached the finished line, she had passed enough people to place second in her age group.

Mary was joined in the race by five more runners from Flexo-Graphics: Mike McDonough, John Witmer, Duncan Kostowicz, Jake Gould, and Tim McDonough.  John Witmer had the second fastest time in his Age Group, while Jake Gould was third in his age group. The event has become an annual gathering for Flexo-Graphics. In total, nearly 300 racers from Milwaukee area organizations participated  in the run. The event was held September 17th, in downtown Milwaukee near the historical Schlitz Park.